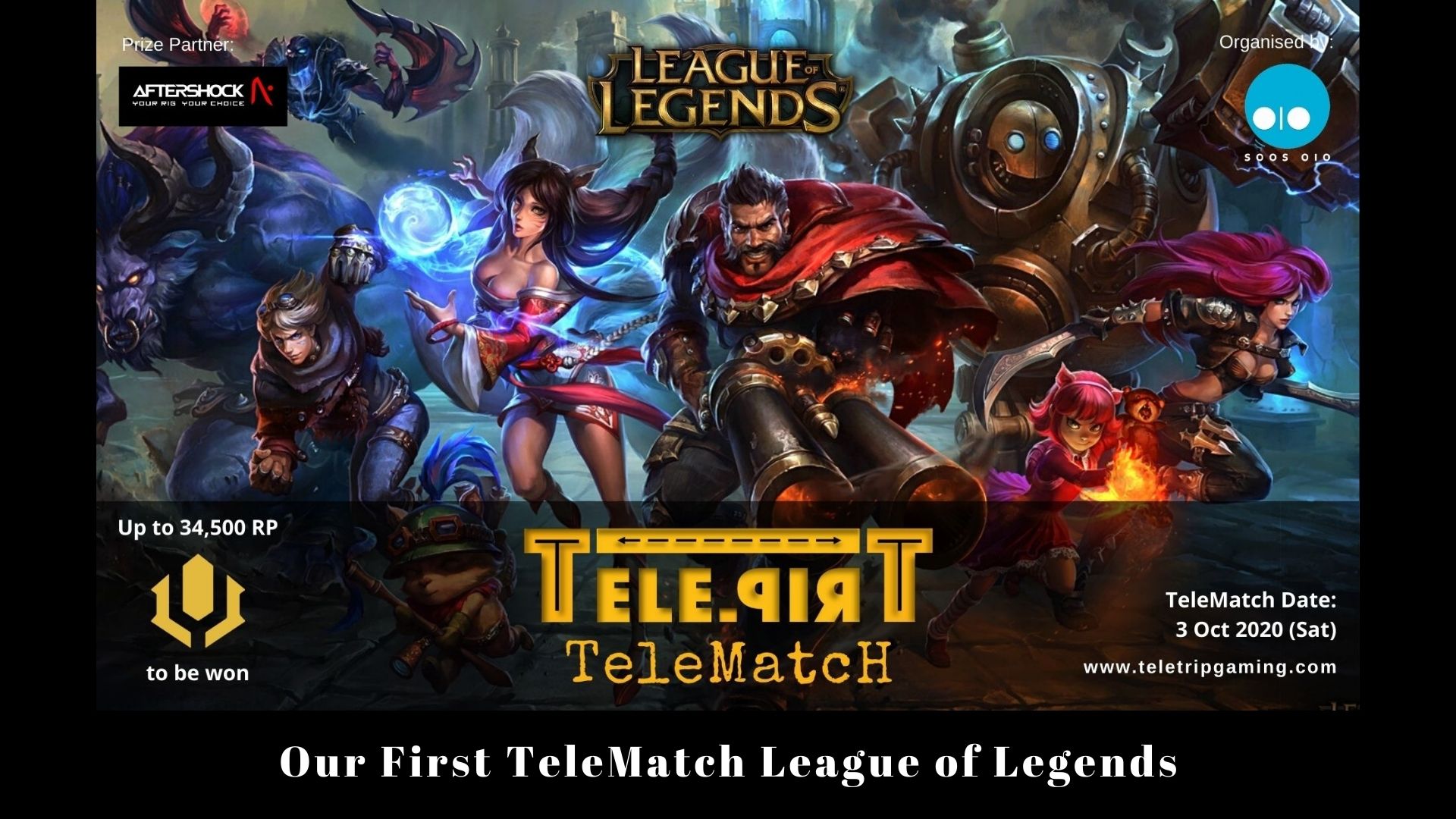 Coincidentally on the same start date of the Worlds 2020 Main Event, our first TeleMatch League of Legends for casual players was organised on 3 October 2020. Appreciate our prize partner Aftershock for the support.

We had 10 teams of all ranks gathered and playing their hearts out at TeleMatch League of Legends. It was amazing to see the teams showing sportsmanship after the game, calling GGWP after the games and wishing the opposing teams all the best for their next! Friendships were even forged as we heard that some of the teams stayed in contact to play more games of League of Legends (or Among Us) after TeleMatch.

To make sure that TeleMatch runs without a hitch, we had the facilitators and caster who volunteered to thank. This time, we even had a facilitator helping us out all the way from Australia! As TeleMatch is a community-initiative, we welcome volunteers to help out be it as a facilitator, caster or livestream production assistant. Feel free to register as a volunteer to help out here!

Congratulations to all the teams at TeleMatch League of Legends!

Here are the results of TeleMatch:

Throwback to November 2019, we had our first private TeleTrip Campus for Temasek Polytechnic’s Game Design & Development (GDD) students on 4 November! We are grateful for the overwhelming support from 40 students who signed up with us.

Due to connectivity issues, there was a slight change to the format and rules of TeleMatch: Single-Elimination 1-v-1 mid.  Each team had to send a player to compete while using the same character. Each player is only allowed to play once, so teams have to plan who to send forward and how to win their opponents. The winning teams of each round will proceed until a TeleMatch winner emerges.

As usual, we started ice-breaking with self-introduction during TeleTalk. Even though most of them have been course mates for a year, the students were surprised to find out that these course mates play League of Legends. They also got to know more about their new teammates of the day.

With only 15 minutes to plan for their games, it was interesting to see how each team prioritized their discussions. Some focused on drafting and champion pool, while others focused on getting to know their new teammates and their playstyle preferences.

While the teams were looking forward to executing their strategies against their opponents, we faced an unforeseen challenge: latency.

We continued to try various methods to solve the issue but to no avail. After much deliberation, we decided to change the format from a 5v5 to a 1v1. We are encouraged to see the students stepping up to offer solutions and accommodate the potential solutions (such as playing in different rooms). Some students even took the time to teach their teammates who were new to the game on how to play certain roles!

Cheap Thrills: Watching a League Match in the Classroom

The students adapted to the new format and rules of  TeleMatch and another round of discussion began. They cheered for their friends who were playing and even commented that “this is the first time we gotta watch a game openly in school”!

Even though it was a 1v1, no teammate took a backset. During each match, the teammates of the representative continued advising and sharing information (which was allowed in TeleMatch).

We loved how the students reacted to the situation and challenges positively. Well done everyone!

Shoutout to the lecturers Douglas and Malcolm, and vice-president of TP GDD Special Interest Group (SIG) Kristy for their tremendous help and support in making this TeleTrip Campus possible!

And also special thanks to our facilitators!

We officially ended the day with Pizza Party and are glad that the students loved the pizzas from De PaStar!

Thank you Temasek Polytechnic for providing the venue for TeleTrip Campus! Appreciate the support from all our partners, AftershockPC, SCOGA and De PaStar in making this TeleTrip Campus possible. Shoutout to the TP lecturers: Malcolm and Douglas, TP GDD SIG vice-president Kristy, and our facilitators: Jun Wei, Chris, Alan, Hakim and Zhi Chun for all the help. Last but not least, to the students who came and made TeleTrip such a fun and memorable day for all of us ^-^

Hope to see you at the next TeleTrip Campus!

At long last, we have our first TeleTrip Campus for League of Legends at James Cook University on 20 July. It was amazing to have 20 players joining us!

The format and rules of TeleMatch were kept simple: Round-Robin Best-of-2. To keep the games exciting, the team with the most kills will also win a prize, alongside other team and individual prizes.

Interestingly, about half of our players are Vietnamese, and each team had a mix of Singaporeans and Vietnamese. Despite coming from different countries and culture, no one could tell the difference. Everyone was chatting and having fun like a big family, even with the occasional Vietnamese conversations. The players lent one another their game accounts without hesitation when they realised some of the other players could not enter the custom draft lobby due to differing account levels.

Conversations were not limited to the games as they continued them through their lunch: fragrant chicken rice and nasi lemak for the Muslims. This helped the players concentrate on improving their strategy during lunch without interruptions.

Below are key lessons learnt from each team.

Team 1:  Assess and Adapt to the Situation

It was a wild roller-coaster ride for Team 1 earlier in the day. Two members only managed to arrive before the game commenced, leaving the team with no time to know each other or do up their game plan.

The challenge was elevated as there were four Vietnamese in the team who naturally spoke to one another in Vietnamese, leaving their sole Singaporean player out of the conversation.

Surprisingly, things started to change during Game 1.  With a majority of the team made up of Vietnamese,  the conversation should continue in their native tongue. Yet they started speaking English to provide information. By the end of the day, they were communicating fully in English.  So what brought the change?

It turned out that the team realised how strong and efficient the Singaporean player was. They then decided to play around him. In order to do so, they put aside their language preference and used English to discuss their strategies, define their roles. All these to make sure that the Singaporean player had all the resources he needed in the game.

The team ended up being so comfortable with each other that they managed to win all their games and become the eventual winners of TeleMatch!

How do you behave when it is your first time playing or knowing each other in a team? Speak politely and keep your cool even if the game situation is not ideal. But for Team 3, it was a different case.

During Team 3’s initial games, every member made sure to be polite to each other. But the facade couldn’t last long as games got more difficult and the team’s morale dipped.

Instead of staying nonchalant, two of the members who were really polite during the initial games, started to raise their voice and cheer at every team kill.  It was so abrupt that the other three members, who were more reserved, started loosening up and joined in the cheer as well!

Team 3 had so much fun and started playing as a team. They won the Best Teamwork prize!

It is easy to lose your fighting spirit when placed last, but not for Team 2.

From start to end, Team 2 was constantly planning and communicating on how to improve from the previous game. They made it a point to not blame each other for the losses but to speak objectively with regards to the mistakes made in the previous games.

Even though they lost five games and were heading towards their final game, the team did not give up and continued strategising on how to get as many kills while minimising their own deaths, with knowledge that the team with the most kills could still win a prize.

Unfortunately, Team 2 did not manage to get enough kills or wins to be in the running for the prizes. But their efforts and never-say-die attitude were acknowledged and celebrated!

Team 4: Playing Your Part and Doing Your Best

Team 4 had an experienced player and was accompanied by three players who were less experienced. Some even had a limited Champion pool.

Instead of throwing in the towel, the experienced player started sharing tips and strategies for winning the game to his teammates. The less experienced players also started to step up by suggesting what they could do given their limited skills.

For example, they prioritised the picks for the player with limited Champion pool and made sure everyone understood how to hold on during the early game phase so that they could play the late game, which the team is better at. The team even managed to take a game off Team 3 despite losing quite badly in the first game.

So amazed and humbled by all four teams. Good job guys!

Also, a shoutout to the president of JCU’s Gaming Society Zhi Chun and facilitator Alan for helping out at TeleTrip!

Thank you James Cook University for providing the venue for TeleTrip Campus! Appreciate the support from all our partners, Garena, AftershockPC, Kangaroo Nuts and SCOGA in making this TeleTrip Campus possible. Shoutout to Zhi Chun and Alan for all the help. Last but not least, to the gamers who came and made TeleTrip such a fun and memorable day for all of us ^-^

Hope to see you at the next TeleTrip Campus!